Winter is upon us, but to be honest I am not quite ready to give up the Summer Beers yet.  Among my favorite are the misunderstood hybrids from Cologne, Germany, or Köln for our German readers.
The let’s start with the basics of what is a Kölsch.  According to the Oxford Companion to Beeruses the following definition:
“A Kölsch is a top-fermented local beer style from Köln, Germany.  Kölsch beers are characterized by a lightly fruity yeast note in the aroma and taste, as well as a pleasant hoppy bitterness” (Oliver, 2012)
The first thing to note in this description is the fact that this is a top-fermenting yeast making it technically an ale.  Kölsch came into popularity during the 1800s in response light colored Pilsners coming out of Bohemia, though it has been brewed as early as the 13th century (Oliver, 2012).  To be a true traditional Kölsch it must be brewed within sight of the Cathedral of Köln, anything else is considered “Kölsch-style”.  In my experience drinking Kölsch beers they are the palest of the pale beers often appearing straw gold in color.  They should have a good head with small bubbles, and should have the aroma of white grapes or subtle fruity tones.  The taste should be clear, crisp with a thin mouth feel, notable hops taste, and fruity notes.  They should leave no lingering after taste in the long run.  Kölsch beers are also served in a special glass that looks like the below picture: 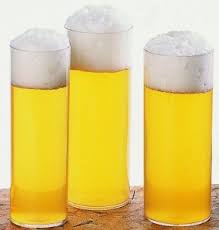 For those of you fortunate enough to get to drink a Kölsch in Germany the most recognizable is Früh or Gaffel.  These are the gold standard for Kölsch beers.  Now for those of you state side, fret not for there are plenty of good Kölsch-style beer available:
Midwest Locals:
National:
Recently we got to tour Mankato Brewery; you can see the video here:  http://youtu.be/LDRZhslDt78